'Back in 2002, I warned Alexander Litvinenko that they set up a special team to kill him.'
--ex FSB agent, Mikhail Trepashkin
LONDON--He's got it bad--and that ain't good. Scaramella has tested-positive for 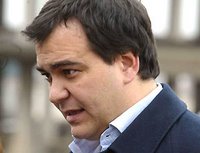 traces of polonium-210. It appears he has some answering to do. At the same-time, an imprisoned ex-FSB spy in Yekaterinburg is saying he told Litvinenko a government 'death squad' was formed within the agency to kill him and other opponents of the Putin regime. Scaramella: who is this man? It seems some in Italy are being secretive about his 'credentials' as an--GAG!--academic. I think his cover has been blown, and he probably has ties to Italian & Russian intelligence reaching-back into the Cold War years. Deep cover means just-that. It's strange that Il Professore is also an investigating Magistrate outside of Naples. He wears too-many hats.

Meanwhile, nobody has come up with any valid-reasons or evidence to support that Litvinenko's employer, Russian Oligarch Boris Berezovsky, is behind any of this. None of this matters in-light of the Dr.'s contamination, except this: facing his own potential-death, he's likely to start talking about everything he knows. He'd better make-it-quick and public. It all reminds one of the intrigues in London and Russia before, during and after the Revolutions of 1917-1918. Master spy Sidney Reilly was a free-agent, and an exemplar of how an operative can be pulled in every-direction (even against-their-will). 'Reilly' was really a Russian-Jew named Rosenblum from the underworld of Odessa, and his entry into Great Britain was through the emigre community of London. Just like one Alexander Litvinenko.

The Players:
http://www.redorbit.com/news/international/738812/pale_gaunt_and_ghostlike_the_former_kgb_agent_who_is/index.html
Il Doctore:
http://eupolitics.einnews.com/news/italy-crime
Sidney Reilly:
http://www.crimelibrary.com/terrorists_spies/spies/sydney_reilly/8.html
UPDATE: Litvinenko's wife has tested-positive for radiation contamination. His children are probably next, confirming the personal nature of this hit.
Posted by Matt Janovic at 12/01/2006 11:04:00 AM