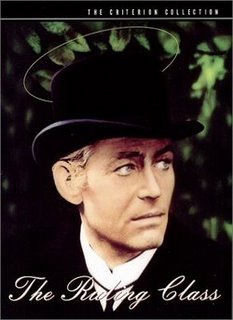 Could there be a film crazier than Marat/Sade (1966)? Yes, it is the O'Toole/Medak/Barnes collaboration from 1972, 'The Ruling Class.' One could be forgiven in thinking this was a Ken Russell film, but it isn't like he was alone in making blistering-cinema during the late 1960s, early 1970s. We will probably never see an era in movies like this again, it was so free and unfettered by the studio system that it pushed the envelope forever (only to have what is acceptable in commercial cinema recede again). Many viewers would say this kind of film is overindulgent, but that is entirely the point. The Ruling Class was originally given an 'X' rating in the UK in the 154-minute cut, but was released with 20-minutes removed in the American PG-version.

The 2001 Criterion edition is the first time the film has been widely-available in this original cut as it was shown at Cannes. There is no better edition, it is perfect, and a must-own for anyone who loves serious cinema.


The story began as a successful 1968 play by Peter Barnes, and it was considered bizarre for its anti-naturalism, as well as the comments on the English aristocracy. If I describe much of it, the effect will be ruined, but there are musical numbers in a movie that is not a musical (similar to Brecht here). Similar to Artuad's 'theater of cruelty', the approach is to alienate the audience in particular moments--sometimes throughout the entire piece! This was common in the cutting-edge cinema of the time, just watch A Clockwork Orange (1971), Ken Russell's The Devils, or even Midnight Cowboy (1970). Barnes rewrote the screenplay with very few changes, but don't think that the O'Toole/Medak version is simply a filmed play. It is not, it is much more than that.

At once, a parable on the folly of belief systems, it has much to say about the flimsy glue that is the ruling-class anywhere. Some hierarchy is inevitable in this life, but do we want crazy imbeciles running the developed world? And what of psychiatry or academia? Both are beholden to their own class assumptions, as The Ruling Class amply illustrates. Oddly, it is all about the end of all belief, a hallmark of the time it was made in.

The story is pretty strange, yet plausible: the 13th Earl of Gurney (Harry Andrews) has accidentally hung himself in an act of autoerotic asphyxiation, a monologue/prologue scene that lasts over 15-minutes! It's riveting, nonetheless. With the old Earl dead, there is only one heir left for the Lordship of the Gurneys: the Earl's crazy son, Jack (O'Toole). Jack is completely insane, and thinks he is Jesus Christ, messiah and savior of the human race. The would-be Lord is a paranoid-schizophrenic. He is so insane, his speech patterns betray him immediately. He has constant tics, and flights of fancy that defy words, and make this the finest performance by Peter O'Toole in any film (it's his favorite of all of his film performances).

The performance was nominated for numerous awards in 1972. He really is a sweet character in the first half of the film, and shows some wonderful humanism that is lacking in the rest of his kin. His only conscience is the butler (James Villiers), a closet anarchist! His character recedes as Jack becomes...even more oddly different.

With Jack insane, his uncle Sir Charles (William Mervyn) sets-out to get him declared by a German-psychiatrist he has hand-picked...or has he? It appears that his sister, the Lady Claire Gurney has had an affair with the analyst, and has other-plans for Jack and the whole situation. But Charles has decided he can control Jack through a call-girl he has groomed as the heir's wife, a Grace Shelly (played by the super hot Carolyn Seymour). They are eventually-married by the very reluctant Bishop Lampton (the legendary Alastair Sim!), a distant relative in the Church of England. In such an environment of intrigue, being a paranoid-schizophrenic would be a natural reaction, so one is struck by the fact that being one of the 'ruling class' means to be eventually driven mad. The jokes are biting in this one, with some of the best retorts I have ever heard! To sum it up, the factions are battling for control of the estate through Jack, who is 'J.C.' in the first half of the film. The German psychiatrist finally decides he can cure the would-be Lord with a radical-approach: he finds another madman (the 'High-voltage Messiah', an insane Scot played unforgettably by Nigel Green) who thinks he is God, and puts them in the same room together. It should be noted that Green died after the end of shooting from a barbituate overdose.

This approach of 'two gods in one room' actually has been attempted in psychiatry before, but it usually doesn't work; the delusions are impenetrable. The problem is, the High-voltage Messiah thinks he's the Old Testament God of Wrath and destruction, and it causes a crisis in Jack's version of Jesus, destroying it utterly. You could say that both characters embody the Manichean mythos, and that they hold a heretical view of religion. The High-Voltage Messiah represents the 'demiurge', the blind idiot god of gnosticism, while Jack represents gnostics who believe in the Christ within. Previously, Jack has denied his name as part of his illness and just wanted to be someone else. This is interesting, since early Christians often were given a new name upon entering the cult. Unfortunately, this warmer Christ personality is gone after the treatment, and all that is left is the Old Testament God, and so, Jack takes on the role he was destined to all along. 'I'm Jack, I'm Jack,' says the future Lord, and the psychiatrist and the family think a cure has occurred. 'I'm Jack, alright...Jack the Ripper,' states O'Toole in a moment of hilarity and horror. Instead of the Prince of Peace, he's begun advocating bringing the 'noose back to England', and nobody in the ruling circles notices him as odd anymore. It's really sums up the tone of the film. Most unsettling is the image of the German psychiatrist carrying a cardboard-cutout of the murdered Lady Claire around, yelling 'Cock-a-doodle-doo!'

It becomes clear that Jack is going to be the quintessential 'Lord of Old', a murderer and a punisher, a warlord and an ancient patriarch who kills his children to feed the bloodlust that is at the heart of the will to power. Nobody will be controlling Jack: the butler is off to prison, Charles and the Bishop are off to a nursing home, and the rest had better watch their backs. He dispatches a few of them forthwith. There are a number of scenes that are expressionist: we see some of Jack's hallucinations, such as when he murders Lady Claire in an 1888 Whitechappel-setting, or when he comes to the House of Lords for the first-time--he sees all of his peers as rotted, animated corpses, intercut with what we see. Jack views reality through a poetic lens, nonetheless.

This latter scene speaks volumes of the undead nature of ruling institutions, and used to be applied to the Catholic Church; it is a Medieval notion. But, it could apply to the aristocracy of Great Britain, which seems to be eternal. It should be noted that the film is a great technical achievement in cinematography and composition. There are also very creative applications of sound elements that aren't related to the images, which are very effective, and are reminiscent of similar techniques in Midnight Cowboy. Bizarre, sexy, unsettling, entertaining, thought-provoking, and classic. The ending? There is no end to this story.