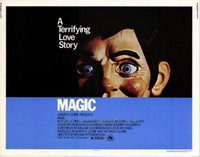 "Abracadabra, I sit on his knee. Presto, change-o, and now he's me! Hocus Pocus, we take her to bed. Magic is fun...we're dead." --The tagline to Magic

Schizophrenia is still a very controversial mental-illness, and many psychiatrists have argued over the years that it doesn't even exist. But what we do know is that the mind can fragment into quasi-independent parts that can behave like personalities, or aspects of personalities. At any rate, the neuropathology of schizophrenia is unknown and has only been studied for some 100 years! Right now, the science tends toward heredity being a primary-cause, but there is no total consensus.

Enter the movies: While psychological horror is nothing-new to cinema, this 1978 film by Sir Richard Attenborough (A Bridge Too Far, Gandhi) is very-very special, and offers some interesting speculations. Originally a best-selling novel by William Goldman (who also wrote the screenplay), this is also the 'big-break' of Anthony Hopkins. It was the moment the public really took-note of this 40-year-old actor. Other than The Bounty (1984) this has to be his best film-performance, where he even had to learn to articulate a ventriloquist's dummy and throw his voice.

Hopkins plays Corky, an amateur magician who is too shy to charm an audience where he bombs at his first performance in the film's opening prologue, subbing for his dying mentor, "Merlin." Corky had become enraged and scolded the bored crowd and had a kind of a mental breakdown. Cut to two-years-later, and Corky is selling-out the same nightclub with a residency and lines around the block. There's been a strange transformation in the entertainer, and he's gained some kind of an edge.

Something happened over those two years and Corky's addition of a foul-mouthed ventriloquist's dummy named "Fats" has made his act wildly popular: he's funny and profane, spouting dirty-jokes and insults at his audience. Fats acts and looks like a distorted version of Corky, maybe even his shadow self, a nice touch of the Jungian in the screenplay. But, was it "Fats" who chewed-out the audience two years ago, or was it Corky? Or was it some supernatural force, a dead soul raging against the living? As in life, there are no easy answers in the late Sir Richard Attenborough's version of Magic. Screenwriter Goldman and director Attenborough let us decide for ourselves, and it's this enigmatic style that makes Magic so interesting and incredibly chilling. Jerry Goldsmith's eerie score doesn't hurt either, it's reminiscent of Bernard Hermann. This is a small story with epic dimensions, the landscape of the human mind, the human soul. Magic is classic tragedy.

Sure, we know that Fats isn't really alive and that he's just an extension of Corky's tortured psyche, but there are a few moments where he literally moves without help, shot objectively! It is as if the disease has externalized itself, taking over the protagonist and even the narrative. The effect is especially eerie. There is a light-touch of ambivalence as to whether Fats is more than just a part of Corky's psychosis, but this is soon upended by several objective-views of his behaviors without Fats; but Attenborough keeps things ambivalent nonetheless, and all the way to the finale. Fats only moves a few-times without Corky, and sometimes Corky sounds like Fats when he gets angry. One almost gets a disembodied-sense watching this, a little taste of madness. And so, with his fame comes a fear of exposure of his illness. His show-business agent wants him to take a physical for a network television-appearance, and Corky refuses, escaping to his hometown in the Catskills.

He seems to know instinctively that he is mentally-ill and Fats the dummy even reminds him that, "We're special." Indeed "they" are, they are abnormal since it should be impossible for there to be more than one of them. A schizophrenic fear of persecution becomes obvious in the protagonist over time. Fats wants to return to Manhattan to fame-and-fortune but Corky doesn't, he wants to hide. The pressure builds as the two personalities fight, and Fats becomes jealous of a childhood love named Peggy, played by the legendary Ann Margaret. She runs the cabin Corky and Fats are hiding-out in, hiding from the world. Corky's relationship with Peggy can only be doomed from the start, and one gets the impression that because of his illness he's never truly grown-up and that he's incapable of an adult relationship with anyone.

There is something so creepy about Fats, and it isn't hard to believe that he comes from somewhere deep and unknown within the human mind, a kind of atavistic force that might have been useful once for the purposes of survival; at one time, we may have had to be many people. Therefore, Fats is a force rather than a personality, and he is virtually rage and vengeance personified. Corky repeats his fears of failure to Peggy in a mind-reading session with playing-cards, and it is here that it seems Corky isn't playing with a full-deck (sorry, I had to write it). Is it a case of MPD (Multiple-personality disorder)? Is Fats a primeval darkness within Corky, brought-on by his illness and magnified? It seems to be a complex combination of many things, and the descent-into-madness of such a likable character is very unsettling and saddening in a way that only insanity is capable of being. Though it's best to remember that this is a movie version of mental-illness, it works, and has a very powerful artistic truth to it, therefore an objective truth. Corky is basically a paranoid-schizophrenic with some writing-touches.

Perhaps Magic's best scene is when Corky's agent (played with subdued class by the late, great Burgess Meridith) finds him at his hideaway and challenges him about his sanity: "Corky, can you make Fats shut up for five minutes?" Corky can't do it, and the scene is hilarious, heart-breaking, and horrific. Eventually, Corky kills a couple people in a feeble attempt to hide his illness and it all just snowballs. Exposure is inevitable, and I leave the ending for you to watch yourselves. Magic is a film that is both funny and sadly poetic, portraying the dying of a beautiful, prismatic-mind that had so much to give but couldn't. This makes Corky the classic misunderstood "monster," and Magic, a horror film. He simply cannot help himself.

Mental-illness in the universe of Magic is tragedy--as it should generally be viewed as--and our connection with Corky is almost like that of an accomplice, just as with Norman Bates in "Psycho" (1960) when we guiltily worry he's going to be discovered. We want him to keep hidden as a part of natural empathy. Magic is that wild ride that is both humanizing and sad, but also very entertaining, even a criticism of the entertainment world itself, not a very healthy place to be in most ways. After all, once Corky is sick, the crowd loves him. The more he openly reviles and despises him, the more they love him and his little friend. Fats, then, really is an externalization of his illness, and it all seems like a diseased version of the American Dream, a disease of another kind.

While the majority of schizophrenics aren't violent as in this classic movie portrayal of insanity, this could certainly happen, and that's why I find it so horrifying. People lose their minds, and they lose control to impulses that we and they do not understand entirely. This is the terrible horror behind Magic, it's black heart. Hopkins did the eerie voice of Fats, even throwing-his-voice, and he gave the dummy an old vaudeville/freak show barker quality. To these ears, he sounds like a street hood from 1920s New York City, like a completely other personality than Corky's. Fats sounds like someone who lived once in another body, rather than some strange voice from the depths of a tortured man's soul.

The twist-ending seems to support this possibility. So, one would imagine from Anthony Hopkins' performance that he was at least nominated for a major award. But, this was an independent film by Attenborough and producer Joseph E. Levine, so an Academy Award™ was out. It's ironic that so many films that win Academy Awards™ any-given-year are often forgotten, but ones like Magic are remembered fondly. As anyone knows, Magic is timeless.