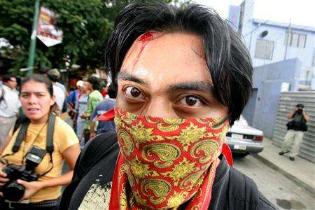 OAXACA--In the old Indian towns and villages that were once the victims of the Aztecs, leftist protestors have been erecting barricades and fighting pitched-battles with local officials and what they describe as 'hired-thugs' and goons. This began, ironically, as a teacher's strike, but has grown with the sense that recent state elections were not secure. The AP is reporting that 'leftists have blocked streets for months demanding the ouster of Oaxaca state Gov. Ulises Ruiz. They claim the state government has sent gunmen and thugs to provoke them.' The story that Fox has just sent Police troops into Oaxaca is untrue, Federales have been spotted in a number of acts of unprovoked-violence against citizens of the city, and protestors.

An American journalist has also been killed in shootouts, and it appears our ambassador to Mexico is conceding it was by Mexican Police from Oaxaca. Local leftists want the PRI-governor to resign based on what they claim was a fixed-election in 2004, and have seized TV and Radio stations, as well as running-out the local Police. It doesn't take a genius to understand that most Mexican states are run by corrupt, incompetant modern-day campesinos who brutalize their mostly-impoverished subjects through the corrupt Policia. People can only take so much, and it resulted in the situation we have today. But, the job of the press is to make you forget or ignore the context that led to all this. People have to be pushed to this, remember that much.
Ruiz has been appealing to President Vincente Fox (also PRI) for months to send Police paramilitary-units, and the President has only now responded. It appears Mexican-elections have something in-common with American ones, and that there is a stronger-desire for direct democracy in Mexico than in the USA. With indigenous leaders rising in other Latin American states, we are witness to a major-shift in the politics of the Western Hemisphere. Expect more insurrections by our neighbors, uprisings that should be supported by working-class North Americans--that means you, AFL-CIO, and all North American unions. The protestors have been holding the center of the city for months now. It will be interesting to see what this event's effect on the other contentious-election (this year's Presidential election) will be. We could be seeing the disintegration of Mexico as a modern nation state, into zones of indigenous-control and autonomy.
Expect more of the same misinformation--the cops attack the protestors, then the violence is blamed on the victims by the mainstream media.
http://oaxaca-travel.com/
http://www.oaxacatimes.com/
http://www.zmag.org/content/showarticle.cfm?ItemID=10769
http://www.tripadvisor.com/ShowTopic-g150801-i459-k805969-Oaxaca_Violence_Continues_U_S_Government_Extends-Oaxaca_Central_Mexico_and_Gulf_Coast.html
http://www.workers.org/2006/world/oaxaca-0629/
Posted by Matt Janovic at 10/28/2006 03:43:00 PM